With the presence of DrupalCon DC 2009 attendees coming from Argentina, Brazil, Colombia, Peru, and Venezuela, and with the participation of Greg Knaddison (Drupal Association General Assembly member who has travelled extensively in South America) and other Drupalistas with ties to South America, an historic meeting of the South American DrupalCon Organizing Committee, chaired by Drupal Association Board Member Cary Gordon, was held on Saturday March 7, at the DrupalCon DC 2009 venue, the Washington Convention Center. The clear intention of holding a DrupalCon in South America in June, 2010 was formally announced to the Drupal Association and to the world at large. In addition, a series of DrupalCamps were announced for this year: Sao Paulo, Brazil (April, 2009); Buenos Aires, Argentina (June, 2009); Lima, Peru (September, 2009).

For the full report, go to:

Report on the March 7, 2009 meeting of the South American DrupalCon Organizing Committee

A clear intention was registered and formally announced to the Drupal Association for the holding of a DrupalCon in South America in 2010, to be held in between the North American (March) and European (September) DrupalCon’s, which is to say sometime around June, 2010.

It was resolved to plan for a series of well-planned and strongly attended DrupalCamps in the course of 2009, in the context of strong interaction and cooperation between Drupalistas in the entire region, and in strong cooperation with the Drupal Association and leading Drupal sponsors.

Cary Gordon stressed that each organization should plan to the best of its ability, but should not overload itself with unrealizable objectives. The DrupalCamps could be conferences, or the more informal “unconferences”, and in either case, the Drupal Association will put the local organizers in direct communication with experienced mentors who will walk them through the events. The recent New York DrupalCamp unconference is an example worthy of note, it was a great success with 170 signups and 130 attendees.

It was agreed that each of the drupalistas in each of the South American cities and their users groups would actively collaborate with each of the DrupalCamp’s to the fullest extent possible, by sending delegations and providing other support and assistance.

Needless to say, the meeting ended on a high note of enthusiasm, as can be seen in the “official photograph” (unfortunately Cary had to rush off to catch a plane): 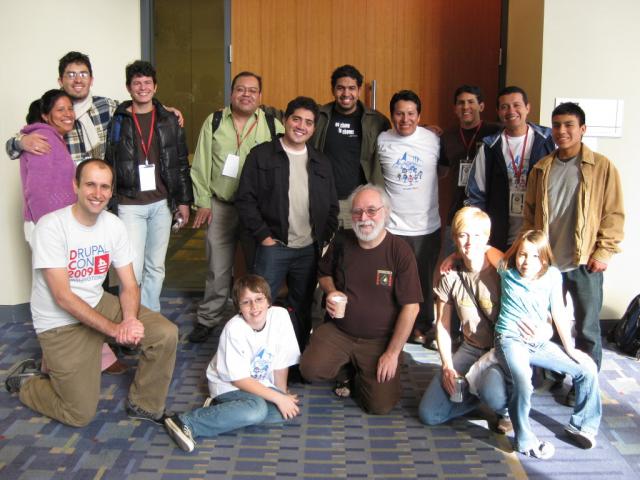 My own fair-to-middling presentation skills must have been amazingly fortified by the best of Emma Jane‘s magical advice for we presenters, because yesterday I was able to get my point across!

Also, it is evident that the level of interest in Drupal being able to count on an agile approach based Drupal built project management, prototyping and deployment and monitoring application to be made available as a Drupal distribution profile, and to remain available free as in beer and in free speech… is very high. It’s on its way to Mars.

Over a hundred people were present at the presentation yesterday Thursday at 4:15, and despite the fact that I only had 30 minutes (plus a generous 15 minutes overlap with the break) to present some pretty involved relationships and workflows, plus show some practical demonstrations, the response in terms of interest was overwhelming.

Later on more than twenty people signed up for an account on projectflowandtracker.com and started working on their projects!

Reference: Organic Groups: What It Can Do and Where It’s Headed

Still main maintainter of the Organic Groups module, which he authored.

Didn’t resist first slash.com, but soon did.
Today people are making a living with Drupal, Drupal is all they do.
Highlight 2004:  first time he gave a Drupal demo, with a Drupal T-shirt. Drupal Camp Antwerp
A trip down memory lane… the Drupal old timers… they all stood up

Organization really great, internet works a dream, tons of friendly volunteers welcoming you with T-Shirts, great atmosphere, lots of greetings and hugging, and meeting those folks behind the faces (I mean, people you have only met through a photo or video)…

It is updated with info on how to check out the demo site at http://projectflowandtracker.com .

What I am going to see this morning:

I will be reporting a little later on, on the following sessions: