In this series of articles we’ll see how to set up a Cloud App Server with CouchDB and Node.js on Ubuntu 10.04 LTS, and why.

The Web App is dead! Long live the web app

It’s not the rise and fall of the meca of native mobile apps. I think they’re beginning to be dead too, if left to themselves. I guess Quora is a good example. It’s a software application designed with an architecture that simply cofins the old single server or cluster web application architecture served up in the browser. As explained in Phil Whelan’s exciting article Quora’s Technology Examined, it was created from the ground up as a cluster of distributed servers setting up a totally asynchronous dialog with the browser client in order to fulfill a very simple set of user stories, and fulfill them it does.

Distributed components: the signature of the cloud app

Without getting involved in language or platform wars, it is clear that the starting point is a simple set of requirements forming a killer app, for which the heavens are assaulted to yield constellations of servers to get you implementation.

First off, there is no such thing as THE database. And I’m not talking about master slave replication or clustering of THE database. Now, data is distributed among the client, database servers, server memories (with technologies like Thrift), according to what’s really going on. Quora uses MySQL but without joins, sharded and schema-less in the How FriendFeed uses MySQL to store schema-less data manner.

As a veteran of document based storage (I built a newspaper CMS based on Xindice, a native XML database, about eight years ago) I’m gonna go with CouchDB. I know a lot of people are going with MongoDB, another popular no-SQL, document-oriented  database. They are both good, depending on what you are doing. My choice in favor of CouchDB right now, curiously enough, originated in a blurb on the MongoDB site itself Comparing Mongo DB and Couch DB:

if we were building Lotus Notes, we would use Couch as its programmer versioning reconciliation/MVCC model fits perfectly.  Any problem where data is offline for hours then back online would fit this.  In general, if we need several eventually consistent master-master replica databases, geographically distributed, often offline, we would use Couch.

Mobile Couchbase, as one example:

Couchbase Mobile allows developers to write web applications one time, synchronize multiple copies and share data and applications across any computing platform or mobile device…. keeps the data on all your devices synchronized with the Couchbase database in the cloud.

And did I mention that CouchDB is fault tolerant?

Of course one of the things we desperately need to do is to liberate ourselves from data-centric architectural slavery. We wanna go to a very simple set of user stories and get it done. The above quora example shows that a modern cloud app isn’t going to shove everything down a single web server bottleneck at all; apart from the traditional load balancers and reverse proxy servers, it also has:

Again, without going to the language wars, I’m gonna go with Node.js

“If you want to make something where the user gets a real-time update stream of some kind, you need to keep open a bunch of connections to the server. That’s very expensive in, say, a PHP architecture. But in Node, it’s nearly free. You can keep the connections open for a very long time, and the incremental cost per connection is very low,” Ranney, Voxer’s CTO, tells The Register.

I’ve been working for some time with CouchDB and Node.js, and taking a good hard look prototyping stuff in Express, so I was super gratified, not to say super positive feedbacked, as well as re-assured, to learn that old friends are basing some super Open Source software on these technologies as well. So it’s all very, very exciting. So let’s get started.

Like Quora, let’s just go with Ubuntu as server OS, whether dev, staging or live. To start off my staging server(s), I just headed over to linode (link top right of this page) to grab a VPS (live will of course go to the cloud, but Rackspace looks much more likely now than Amazon…). I selected the 10.04 LTS as a matter of principle (following wise suggestions) since I will be able to update for years to come.

If you’ve never used a VPS before and are coming from shared hosting web app environments, be sure to check out the Linode Getting Started page or similar if you are using a different setup, in order to log in via ssh, set up the hostname and timezone, etc.

So, now we have a brand-new server, how to install CouchDB?

While the second option will give you the latest stable version with all libraries and dependencies included, and may be the best option for many people, I decided it would be best for maintenance purposes and just in the name of full control and independence to go with compiling from source with everything in /usr/local for easy removal and reinstallation. That’s what I will document here.

Several examples are mentioned and while going with the minimal install (Example 2) was tempting and might be the way to go eventually, I am gaining familiarity and intimacy for now, so Example 1 (Alternative) (“This set of install instructions is modified from Example 1 and places all current CouchDB files within the /usr/local/ tree. Any other CouchDB related files outside of /usr/local/ can be deleted or ignored.”) is my choice for now.

Many thanks to http://tommy.chheng.com/2009/07/10/installing-couchdb-on-ubuntu-problems-and-fixes/ for the addition of unmet dependencies before configuring, compiling and installing couchdb.

These same dependencies are mentioned for Example 2.

Here is Example 1 (Alternative) with my own modifications to make it work with 1.0.2, and comments in ###:

I have attached the perl script couchdb-tunnel.pl found on that page, edited the configurate found in the first two lines (lines 3 and 4 left at 5984 and 127.0.0.1 respectively), and run it on both Ubuntu desktop and Mac Pro, and obtained the following results: 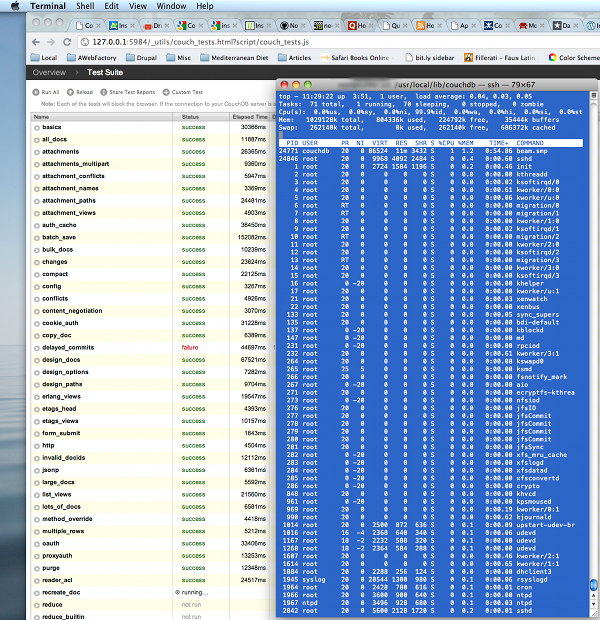 In a manner analogous to MySql, by default CouchDB is set up for local access only, through 127.0.0.1 . You can change this just as easily, by editing the file /usr/local/etc/couchdb/local.ini and setting bind_address to 0.0.0.0

Now you can have apps going on with design deocuments, etc.

However, this will make your server insecure, and you will need to start using authentication and authorization for administration and editing. Check out the lower right-hand corner of Futon, where it says “Welcome to Admin Party! Everyone is admin. Fix this (link)” to get started.

So CouchDB is installed, now wot?

Couple of cool resources to get you started:

The following pages give good background on installing node.js and npm in various situations, including without root access and even without sudo access:

In any case, I do want to install as root, making the install default simple and server wide, and maintainable. So I chose accordingly.

“Node.js itself has no external dependencies except common build tools as well as pythons for the build system itself. On OSX you must install XCode for this to work, and on Ubuntu you probably have to run: $ apt-get -y install build-essential” – Felix’s Node.js Beginner’s Guide http://nodeguide.com/beginner.html#installation

All set to go on these after installing CouchDB as per above steps. To install git:

Note: This is actually the most straightforward way, once the dependencies have been dealt with:

Go to http://nodejs.org/#download and grab the tarball (do this in /opt or wherevery you like):

(See https://github.com/joyent/node/wiki/Installation for installing locally, relative to your $HOME)

Edit: Very important to add checkout statement for the latest stable version, instead of just Master unless you are experimenting. To find out which is the current most stable version, go to http://nodejs.org/#download and to see. At the time of writing, it was node-v0.4.8.tar.gz, which can be installed by unpacking and running configure and make install as detailed above.

So node.js is installed, now wot?

According to instructions at https://github.com/visionmedia/express I did the following in order to access the express executable globally:

Then, as a dev user, I create a first create a skeleton

Then I cd into it and install express and jade dependencies

Then I can execute the test app:

Skip back to main navigation